The Dept. of (my) History: Marky Mark Revisited 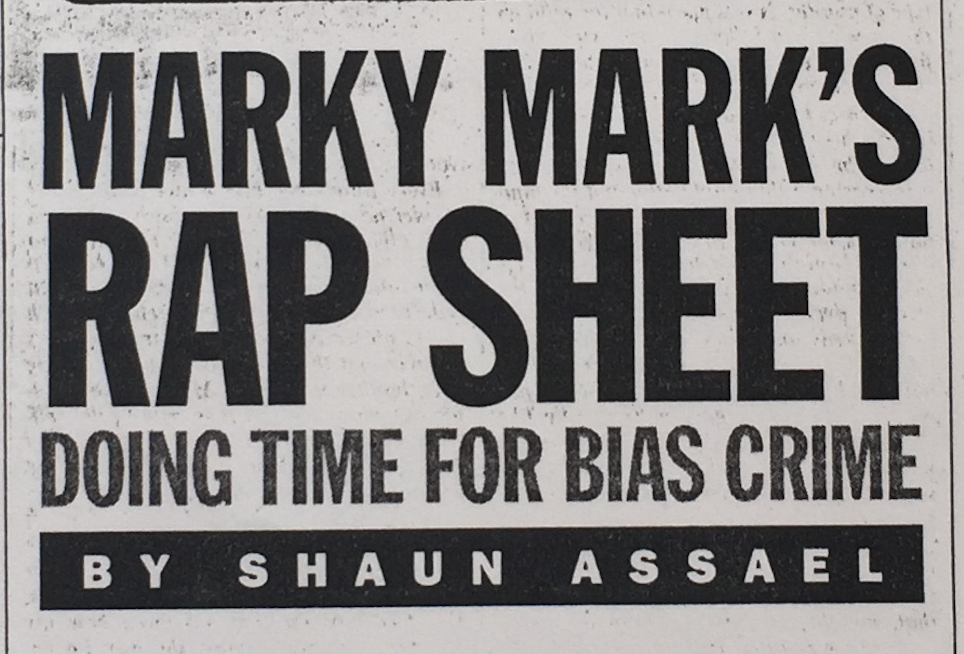 I was just hanging around my house this quiet Sunday afternoon, reading James Lee Burke, when my Twitter feed started exploding about Mark Wahlberg. Let me explain…

In 1993, Wahlberg was touring as Marky Mark when I unearthed the court papers that revealed he’d been convicted of hate crimes as a teen in Boston. This was at the height of his white Calvin Klein underwear fame, when he was touring with the Funky Bunch and cashing in on the crossover appeal of hip hop.

The court papers were a window on life in Savin Hill, the racially tense section of Boston where Wahlberg’s large family lived among black and Asian households. On June 15, 1986, 12-year-old Shamele Coleman just wanted to get home safely with his brother and sister when a Mohawk-toting Wahlberg chased them, hurling rocks and chanting, “Kill the nigger.” The Coleman kids got away, but the next day, when Shamele was returning from a school trip with his class, Mark was back, this time with ten kids, taunting the class and, according to an affidavit from a teacher, throwing large rocks. After he was arrested and hauled into juvenile court, he kept himself out of jail by swearing never to harass “any person because of that person’s race, color or national origin.”

Two years later, after dropping out of school and being arrested for shoplifting and larceny, Wahlberg violated that promise in a confrontation with Thanh Lam, a native of Vietnam who passed him carrying two cases of beer. According to the court records, Wahlberg yelled “Vietnam fucking shit,” and hit Lam across the head so hard that his stick broke in two. Leaving Lam unconscious, Wahlberg ran toward a bystander named Hoa Trinh and told him, “Police coming, police coming. Let me hide.” Trinh tried pushing him away, and got punched in the eye for his troubles.

(All of these documents, and more, are archived on TheSmokingGun.com.)

Considering that Wahlberg later admitted to hitting “the gook in the head with a stick,” and was sentenced to two years in the Plymouth House of Corrections — he served 45 days —it was reasonable for me to ask whether, six years after the incident, he’d undergone the kind of humanitarian conversion that allowed him to become a hip hop messenger of healing.

As the clock ticked down to deadline, I finally reached him at a hotel in Kansas City, where he was due to perform that night. He was 22 — he’s 49 now — and his image was already immortalized in huge billboards, on album covers, on MTV. He was polite, up front, and clearly struggling with equivocation.

“I was also injured in the fight,” he said at one point about Lam. “But the officers weren’t taking any explanation. Everyone was pointing fingers.” Talking about the aftermath, he said, “Nobody talks about how I was on parole for three years and never did a thing. What’s fucked up is that now that I’ve been trying to stay out of trouble, this shit seems to surround me.”

At another point, however, he seemed to be looking into the future. “I’m not gonna blame it on my father not being there, or my older brother being in prison,” he told me. “I’m not going to blame it on anything but myself.”

When we were done, I played the tape of the conversation for my editor, Richard Goldstein. He slowed me down enough to ask the question that I’ve asked many times since: Can’t people change?

The closest I’ve come to Wahlberg since is on a movie screen. But I’m flummoxed about the blowback to his recent post: “The murder of George Floyd is heartbreaking. We must all work together to fix this problem. I’m praying for all of us. God bless. #blacklivesmatter.”

As a 22-year-old, he was already struggling to become a different person. I’m not sure what the statute of limitations is on ignorance. But we’re not going to solve anything if we can’t believe that it runs out at some point.