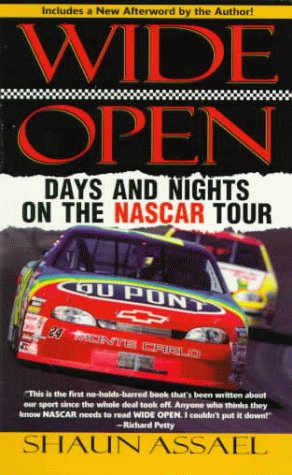 It’s a wild carnival that travels across the country, selling speed as the salvation for all that ails. It’s a world of split-second life-or-death decisions, where huge egos clash on the track, and where old country ways are disappearing into a mega-money hustle of big-city sports. It’s the fastest growing sport in America, spawning idols like Jeff Gordon and Dale Earnhardt. It is NASCAR Winston Cup Tour. . .

Now ESPN Magazine writer Shaun Assael takes us behind the scenes, into the pits and onto the tracks, chronicling the days and nights of Americas fastest soap opera. Secrets don’t keep long, he writes, but they don’t have to. Everything changes fast in the speed world.

Wide Open looks at one full year on the NASCAR circuit as it has never been examined before. This extraordinary book examines the life, the loves, the blood feuds of the stars, the grunts, the drivers, the mechanics, the wives, the girlfriends, the moneymen–everyone and anyone who makes things happen.

Assael chronicles the travels of three particular racers–Bobby Hamilton, Dave Marcis, and Brett Bodine–as they struggle through a thirty-one-race season. He takes us on the political campaign trail with Richard Petty, into Flossie Johnson’s kitchen where she tells what it was like to live with and be left by the legendary Junior Johnson, and into the fascinating and heartbreaking realm of Bobby Allison’s broken dreams.

Wide Open is a funny, tragic, dramatic journey inside a world that has long been closed.

“This book works because it’s not about motors. It’s a book about people, about the pressures they face, the pain they feel and the joys they share.”
– Chicago Tribune

“Assael gives a vivid account of the brutal toll racing takes on drivers, crews and their families…Far from being a gossipy tell-all, this is a solid, exciting account of what is one of the most popular and fastest-growing sports in the country.”
– Publishers Weekly

“This is the first no-holds-barred book that’s been written about our sport since the whole deal took off. Anyone who thinks they know NASCAR needs to read Wide Open. I couldn’t put it down.”
– Richard Petty

“Wide Open is a flat-out wonderful book. Assael straps us inside a high-speed narrative that vividly illuminates the world of NASCAR, where moonshine past and megabucks present collide and colorful characters abound.”
– John Helyar, Barbarians at the Gate and Lords of the Realm

“Assael takes a clear-eyed approach, neither canonizing the drivers nor unnecessarily criticizing their mistakes, and what emerges is one of the most vividly drawn pictures of what NASCAR racing is really like.”
– Car and Driver