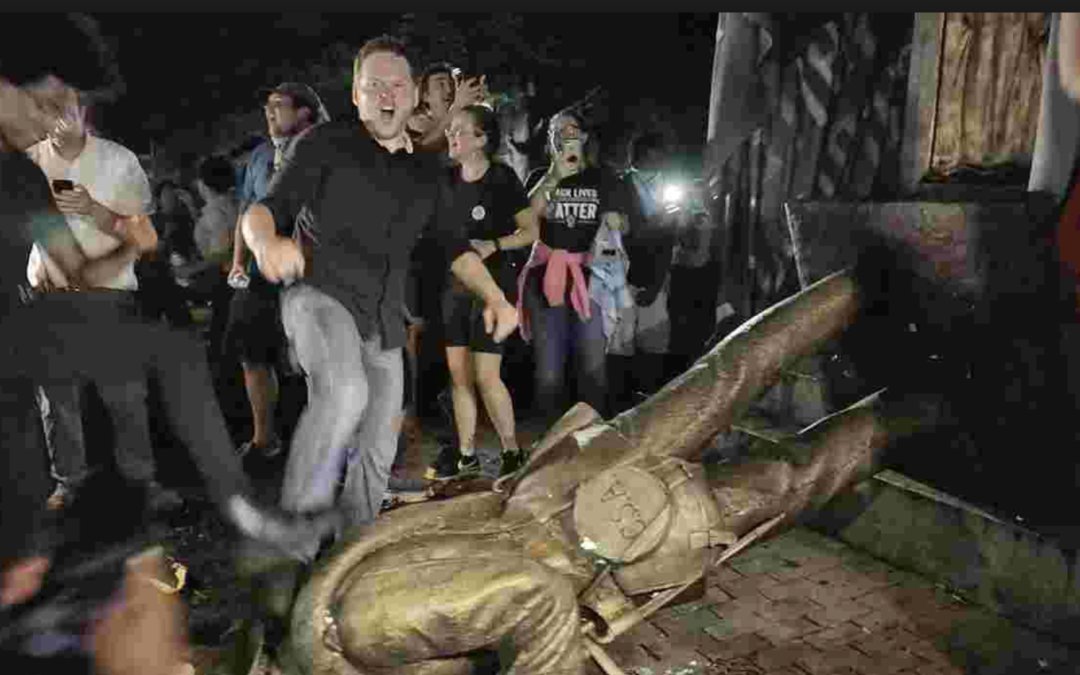 Earlier this week, protesters gathered around a Confederate monument on the UNC campus in Chapel Hill to do what their governor, state legislature and board of regents would not: Topple a confederate monument that many of the students considered racist.
The monument known as Silent Sam was unveiled in 1913 by the United Daughters of the Confederacy, a group I’ve been following for a while. The UDC was originally filled with grieving war widows who went door to door after the Civil War, collecting money for statues to honor their war dead.

Over the years, however, the kindly grandmothers morphed into a powerful PAC. Portraying themselves as teachers interested in education, they strong-armed their way onto school boards where they influenced the way the Civil War was taught in the South. Silent Sam, for instance, was dedicated it to all the students who’d left college “to join our Southern Army in defense of our State.” (To see the full text, go here.)

Their message became known as the Cult of the Lost Cause.

Mitch Landrieu, the former mayor of New Orleans and a Presidential prospect, talks eloquently about the failed message of their cult.

But the Daughters don’t see their cause as lost. On the contrary. While it’s easy to caricature them as out-of-touch old ladies, I found them to be shrewd politicians with their eye on a single prize: Power.

That is, the power to keep dictating the way white history is taught in America.

In reporting this piece for Glamour Magazine, I found that while they may not be the force they once were, the Daughters are still shrewd about exerting their soft power in statehouses across the South. Thanks to their influence (and corollary groups like the Sons of Confederate Veterans), Texas passed a law requiring that school books minimize the role of slavery in the Civil War. Now, school kids learn that slavery was just the third cause of the war, behind separatism and states’ rights — two perennial conservative chestnuts.

In Alabama, the Republican candidate for governor, Kay Ivey, signed a law pushed by the UDC that bars the removal of any memorials, buildings, or street names that have been in place for more than 40 years. Her administration is using it in a suit that seeks to prevent Birmingham from covering up UDC monument that was erected near City Hall in 1905.

Little and her allies know all this all well. A year ago, Heather Redding, an Asian American mother of two named who’s also been active in the anti-monument movement, called the head of the UDC’s North Carolina chapter in the hopes of starting a dialogue. To her surprise, Peggy Johnson, a retired teacher, accepted. Over dinner at a Cracker Barrel, Redding tried to explain to Johnson why so many people of her generation find the statues offensive. But Johnson was literally immovable As she told Redding, and later repeated to me, “These [monuments] were never put there to intimidate anyone. They were put there for grieving mourners. That’s why I don’t think it’s ever appropriate to remove one.”

Knowing that the UDC was going to fight them at every step, the protesters in Chapel Hill felt that they had no choice. So they went all Sadam on Sam.

It’s possible that monuments will recede as an issue. The Unite the Right redux on the mall in Washington, D.C., was a bust. But I wouldn’t doubt for a second the influence that groups like the UDC still wield. In Donald Trump’s America, the Cult of the Lost Cause is alive and well, and at least in the old South, winning.